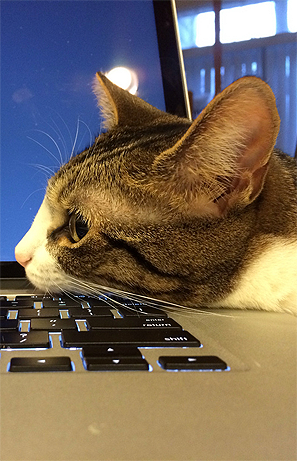 Cat • Install at own risk.

Before we can start programming in C we'll need to install a couple of things, and set up our environment so that we have everything we need. Because C is such a universal language this should hopefully be fairly simple. Essentially we need to install two main things. A text editor and a compiler.

A text editor is a program that allows you to edit text files in a way suitable for programming.

On Linux the text editor I recommend is gedit. Whatever other basic text editor comes installed with your distribution will also work well. If you are a Vim or Emacs user these are fine to use. Please don't use an IDE. It isn't required for such a small project and won't help in understanding what is going on.

On Mac a simple text editor that can be used is TextWrangler. If you have a different preference this is fine, but please don't use XCode for text editing. This is a small project and using an IDE won't help you understand what is going on.

On Windows my text editor of choice is Notepad++. If you have another preference this is fine. Please don't use Visual Studio as it does not have proper support for C programming. If you attempt to use it you will run into many problems.

The compiler is a program that transforms the C source code into a program your computer can run. The installation process for these is different depending on what operating system you are running.

Compiling and running C programs is also going to require really basic usage of the command line. This I will not cover, so I am going to assume you have at least some familiarity with using the command line. If you are are worried about this then search for online tutorials on using it, relevant to your operating system.

On Mac you can install a compiler by downloading and installing the latest version of XCode from Apple. If you are unsure of how to do this you can search online for "installing xcode" and follow any advice shown. You will then need to install the Command Line Tools. On Mac OS X 10.9 this can be done by running the command xcode-select --install from the command line. On versions of Mac OS X prior to 10.9 this can be done by going to XCode Preferences, Downloads, and selecting Command Line Tools for Installation.

On Windows you can install a compiler by downloading and installing MinGW. If you use the installer at some point it may present you with a list of possible packages. Make sure you pick at least mingw32-base and msys-base. Once installed you need to add the compiler and other programs to your system PATH variable. To do this follow these instructions appending the value ;C:\MinGW\bin to the variable called PATH. You can create this variable if it doesn't exist. You may need to restart cmd.exe for the changes to take effect. This will allow you to run a compiler from the command line cmd.exe. It will also install other programs which make cmd.exe act like a Unix command line.

To test if your C compiler is installed correctly type the following into the command line.

If you get some information about the compiler version echoed back then it should be installed correctly. You are ready to go! If you get any sort of error message about an unrecognised or not found command, then it is not ready. You may need to restart the command line or your computer for changes to take effect.

On some systems (such as Windows) the compiler command might have a different name such as gcc. Try this if the system cannot find the cc command.

Now that your environment is set up, start by opening your text editor and inputting the following program. Create a directory where you are going to put your work for this book, and save this file as hello_world.c. This is your first C program!

This may initially make very little sense. I'll try to explain it step by step.

In the first line we include what is called a header. This statement allows us to use the functions from stdio.h, the standard input and output library which comes included with C. One of the functions from this library is the puts function you see later on in the program.

Inside main the puts function is called with the argument "Hello, world!". This outputs the message Hello, world! to the command line. The function puts is short for put string. The second statement inside the function is return 0;. This tells the main function to finish and return 0. When a C program returns 0 this indicates there have been no errors running the program.

Before we can run this program we need to compile it. This will produce the actual executable we can run on our computer. Open up the command line and browse to the directory that hello_world.c is saved in. You can then compile your program using the following command.

This compiles the code in hello_world.c, reporting any warnings, and outputs the program to a new file called hello_world. We use the -std=c99 flag to tell the compiler which version or standard of C we are programming with. This lets the compiler ensure our code is standardised, so that people with different operating systems or compilers will be able to use our code.

If successful you should see the output file in the current directory. This can be run by typing ./hello_world (or just hello_world on Windows). If everything is correct you should see a friendly Hello, world! message appear.

If there are some problems with your C program the compilation process may fail. These issues can range from simple syntax errors, to other complicated problems that are harder to understand.

Sometimes the error message from the compiler will make sense, but if you are having trouble understanding it try searching online for it. You should see if you can find a concise explanation of what it means, and work out how to correct it. Remember this: there are many people before you who have struggled with exactly the same problems.

Sometimes the compiler will compile a program, but when you run it it will crash. Debugging C programs in this situation is hard. It can be an art far beyond the scope of this book.

If you are a beginner, the first port of call for debugging a crashing C program would be to print out lots of information as the program is running. Using this method you should try to isolate exactly what part of the code is incorrect and what, if anything, is going wrong. It is a debugging technique which is active. This is the important thing. As long as you are doing something, and not just staring at the code, the process is less painful and the temptation to give up is lessened.

For people feeling more confident a program called gdb can be used to debug your C programs. This can be difficult and complicated to use, but it is also very powerful and can give you extremely valuable information and what went wrong and where. Information on how to use gdb can be found online.

On Mac the most recent versions of OS X don't come with gdb. Instead you can use lldb which does largely the same job.

On Linux or Mac valgrind can be used to aid the debugging of memory leaks and other more nasty errors. Valgrind is a tool that can save you hours, or even days, of debugging. It does not take much to get proficient at it, so investigating it is highly recommended. Information on how to use it can be found online.

Through this book you may come across a function in some example code that you don't recognise. You might wonder what it does. In this case you will want to look at the online documentation of the standard library. This will explain all the functions included in the standard library, what they do, and how to use them.

In this section I'll link to the code I've written for this particular chapter of the book. When finishing with a chapter your code should probably look similar to mine. This code can be used for reference if the explanation has been unclear.

If you encounter a bug please do not copy and paste my code into your project. Try to track down the bug yourself and use my code as a reference to highlight what may be wrong, or where the error may lie.

In this section I'll list some things to try for fun, and learning.

It is good if you can attempt to do some of these challenges. Some will be difficult and some will be much easier. For this reason don't worry if you can't figure them all out. Some might not even be possible!

Many will require some research on the internet. This is an integral part of learning a new language so should not be avoided. The ability to teach yourself things is one of the most valuable skills in programming.